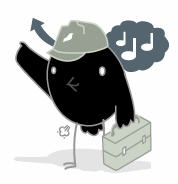 Is Songbird the Firefox of music players? That’s what we’d like to think so of the open source program. Songbird, which is commonly expected to compete with iTunes once it comes out in full version, reached 0.5 last week. We’ve been keeping an eye on the open source music player for a while now and we’re glad to hear about the update. Slowly but surely, the Songbird team have been building up the player, with developers around the world contributing to make it a better program. This new version comes with a number of significant improvements, which you can read about in more detail on the team’s blog.

They include MPT device support (to connect to a number of portable media players and mobile phones), view customization, a better filter picker and rating UI and added developer resources. This last point may not sound very significant to some of you, but to me may be more important than all the other updates. It shows that the Songbird team is really active in sharing the project with other developers around the world. Like with Firefox this means you get an application which is constantly looked after and with all sorts of new features popping up often. An example of this is add-ons. Songbird has its own Add-ons page where you’ll see plenty of extensions to download, from iPod support to an album art manager or a playlist export tool.

This update of Songbird is a good opportunity to encourage you to try it out. It has a sleek interface, a solid iTunes-like structure, an embedded browser through which you can download tracks and read about music news and loads of add-ons to customize it your way.

If you liked this article then you'll love our newsletter!

Join us to receive hilarious memes, photo galleries, tips&tricks, and the best games!